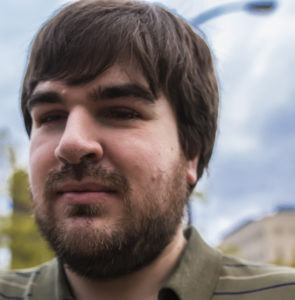 Brandon has been a gamer for a ridiculously long time, ever since his brother played a cruel joke on him as a child. A weird way to get into gaming, perhaps, but it worked for him. He’ll try any game at least once to find out if it can be played by the blind.

You might be asking, “But Brandon! Super awesome blind guy! What’s your favorite game?” Well, let me put it to you like this. If you were to, say, challenge Brandon to a game of Mortal Kombat X, you may find yourself burnt to a crisp, kicked into at least 2 distinct pieces, or at the very least, pummeled beyond recognition.You might say that’s his favorite game, at least out of those he can play.The Last of Us is probably his favorite out of those he cannot.

What about books? Well, Stephen King is his alltime favorite author. Don’t get him started talking about King books, because he is not likely to stop. Ernest Cline’s Ready Player One, though, is a book he holds pretty highly.

When it comes to movies, Brandon likes a bunch of ‘em. So many, in fact, that picking a favorite is nearly impossible. He does like to say, though, that the movie that requires the least audio description of any movie he’s ever seen is Phonebooth.